'Ribbon! How would you define yourself?'

Kiran, my inspirational professor and friend, asked me one day while discussing about culture and humans as we typically did. Then I paused for a while because I wasn't sure if I would be able to define myself as simply only one ethnicity - Asian or pure breed of Korean. My spontaneous answer after pondering a bit was 'I am mixed, a little bit of everything'. In fact, I am, I am biologically, culturally, and socially mixed. I was born and raised in South Korea as a Korean that has a deep root of Mongolian but again in the aspect of biology and anthropology, I must have been mixed genetically with Indian and African as well considering our ancestor, Australopithecus. When it comes to family history, the segmentation and region of my family name is actually from Japan, my personality is more likely Latina, social behavior that I have been accustomed to is much closer to North American, my belief and philosophy that identify oneself are even more combined with a variety of sources through out East to West and tradition to modern. It's just simplified my story, then how about others?

Psychologists even argue that each individual has approximately 20 different identities. In a massively globalized world, we happen to experience and get exposed so many different external conditions and those components absolutely or covertly affect on our self-actualization over times psychologically. How about physical factors of human migrations for centuries and centuries? In the beginning of beautiful fall of 2015, I grabbed my camera to collect actual data and alive historical evidences in order to prove and emphasize how much we are mixed in any aspects of life, how one is different from another, and how one is eventually same from another. This wasn't textbook like cliche but a real story I've encountered on streets and in my hood where I walk around every single day. I thought and still think that languages and all terminologies humans create bridge things together and often break significant facts and authenticity.

The one fact that I hoped to build through these portrait dialogues was We are all one and we are on the process of evolution every second without any concept of superiority and inferiority.

I like urban music and playing Bass, love hockey and tennis. I speak English, French & Spanish. I've been living in Vancouver for 5 years, plan on staying in Vancouver; I'd like to travel to many places also.

I define myself Iranian because I was born and raised in Iranian society and culture. Then lived in Spain for 5years, and I stayed in Winnipeg for a while before I came across to Vancouver. I think I am here to settle down and work. I do painting, love arts and my friend and dog Pipa who has been with me since I was in Spain.

I am mixed 50 Irish, 25French, and 25Danish roots...I'd say. I was born in San Francisco but have lived in Western Canada for my whole life through Calgary and Victoria, making me identify as Canadian more so than American. My mom's side of the family is from Boston, U.S and my Dad's side is from Saskatchewan, Canada. My family still resides in Victoria and I am new to Vancouver.

I speak English and a little bit of Spanish thanks to my 4 month backpacking trip in South America. I intend to stay in Vancouver for the near future, though I hope to travel, live, and work all around the world. My passion is making music and my dream is to ride a Giraffe valiantly into the sunset. Realistically, I'd like to be remembered fondly after I'm gone.

- Alec at the Public Library, Vancouver

I am originally from Guadalajara Jalisco, Mexico. I have lived in West Coast of U.S. for school, then moved to Cozumel for study again . I was looking for more experiences in the Mayan culture but also to spend a good time while visiting different places in South Mexico. Have gotten chances to travel to Canada, Toronto and Quebec, Paris, Florence and Rome, NYC, San Francisco, Perú, and finally I got here, Vancouver, now looking for more experiences getting out of my comfort zone, challenging myself in a big city. I would like to move to Japan, Shanghai or Köln (in Germany) in the future for my career. Ethnicity wise, I think I am fully Mexicano! but so much with traveller spirit.

Ethnicity wise, I am mostly Norwegian and German with a little bit of Italian and 3rd generation of Canadian with the majority of my family originally settling in Saskatchewan. I grew up on a farm in southern Saskatchewan.

I love all art, and my dream is to eventually be working in the industry. London Fog’s, binge watching tv on Netflix and going for drives through the mountains are my favorites. I love my partner, my family and all animals intrinsically (except for muskrats). I would love to travel to the Caribbean (specifically Barbados), Norway and Italy. I plan on settling down either in Vancouver or LA, but at the same time I would like to go back to Europe at some point again to visit France, Germany and Austria with my partner to experience it together someday.

What and why on social media, the tip of an iceberg 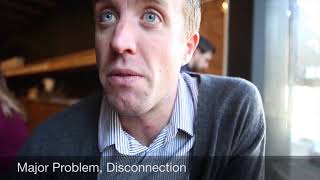 What and why on social media, the tip of an iceberg

The Distance Between 'We' and 'They'